Top Activities in Uyuni That You Can’t Miss

We have gathered 7 tourist attractions in Uyuni that you definitely can't miss! Learn everything you need to know about these not-so-touristy locations that will make your trip through the Uyuni desert more special. 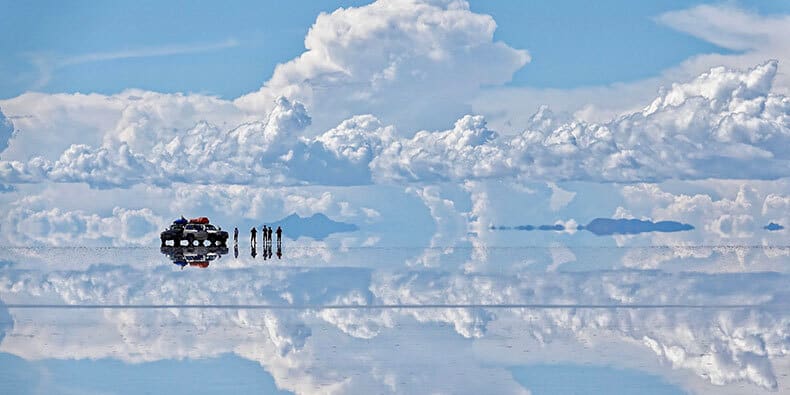 Uyuni is the world’s largest salt flat in South America, becoming one of the best things to see in Bolivia, and hosting more than 90,000 visitors per year, the Uyuni Salt Flats is recognized by its outstanding landscapes, nature, and beauty.

Among all the things to do in Bolivia, the Uyuni salt flats gathers the most astonishing wonders inside the country, the most famous are:

Some places may have gone unnoticed, but here we are to show how to Uyuni in a real way! 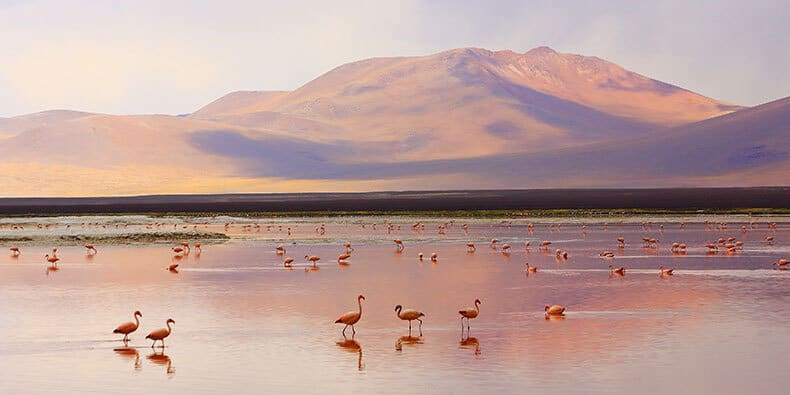 If you are visiting the Uyuni Salt Flats, this is one of the attractions that you won’t like to miss. This lagoon is located inside the Eduardo Avaroa National Reserve.

The Red Lagoon has a dimension of 10,7 Kilometers, and it is less than 1 meter deep. This attraction is also a breeding place to thousands of Andean Flamingos, attracted by its mineral-rich waters.

Folklore stories say that the redness in these waters is because of the blood of the Gods, but this coloration is caused by the red sediments and algae that make the water go from blue to intense red colors.

Fun fact about Laguna Colorada, it was nominated to the Seven Natural Wonders of the World but didn’t make it through the elections.

Located south of the Uyuni Salt Flats and 7 Kilometers away from Aguaquisa, a place that seemed to be an underwater cavern named Gruta de las Galaxias or as in English, The Galaxies Cavern, has captured the sight of many local and foreign travelers. This location will captivate you and leave you intrigued because of its moon-like appearance.

Gruta de las Galaxias was discovered on August 22nd in 2003 by Nemecio Copa and Pelagio Huayta while on an expedition in search of mummies. Although the excursion did not go as expected, they stumbled upon this natural wonder.

This subaquatic cavern was a result of volcanic eruptions on the waters of Lake Michín, currently known as the Salt Flats. 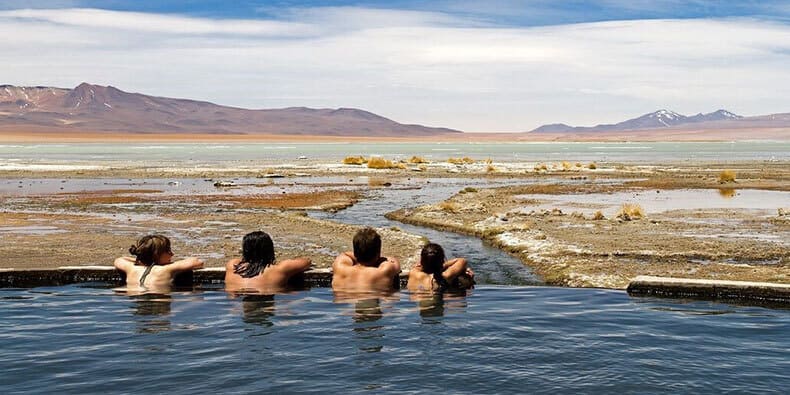 Located on the surroundings of Salar de Uyuni, this is the perfect destination after a whole day of traveling through the Bolivian desert.

Due to the volcanic activity in this area of the country, different natural wonders were formed. The Polques hot springs are the result of geologic activity related to the Polques Volcano.

The Polques hot springs’ temperature varies between 20°C and 29°C.

Coqueza is a small town inside Daniel Campos province, 90 Kilometers away from Uyuni.

In this small town, five mummies from the 1,200 A.C. were found and are still in the cave, the Museum and Archeology Unit in Bolivia have preserved them by keeping the mummies in the darkness since light and wind could damage them. Their clothes, hair, nails, and part of the skin are still intact.

Coqueza is the starting point for those who want to visit the Tunupa Volcano, which according to the local legend, its tears created the Uyuni Salt Flats. 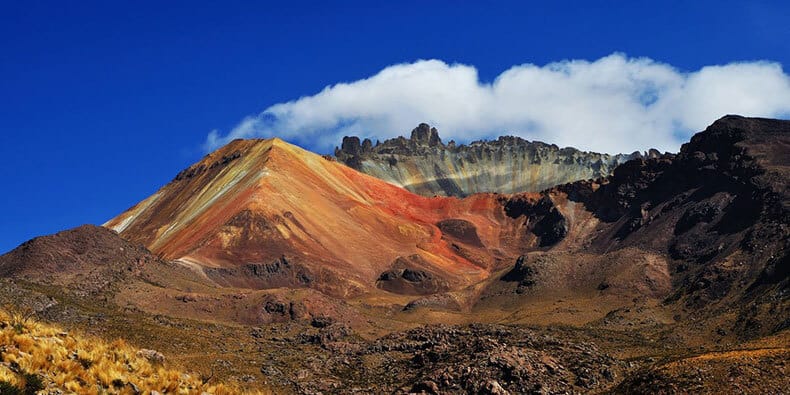 While traveling through Uyuni, some places may have gone unnoticed. Something that you definitely can’t miss is the Tunupa Volcano, which carries the name of the Lightning and Thunders Andean God.

Located at 5,432 meters above sea level, south from the Oruro Department, and bordering the Uyuni Salt Flats, this outstanding natural wonder will give you a full view of the salt flats and its surroundings.

On Tunupa Volcano’s base lies an astronomical observatory, a new tourist attraction implemented by the Coqueza community, which resting and picnic areas will let you see the path that goes up the volcano and take pictures of this majestic place.

This small town is Bolivia’s largest salt-processing industry, located 20 Kilometers away South of Uyuni, Colchani has a Salt Museum, and the most fascinating part of this village is its structures, which are built with bricks of salt!

In Colchani, you can visit the traditional salt factory as well as buying souvenirs made entirely of salt. It is believed that around 25,000 tonnes of salt are excavated and processed every year in this region. 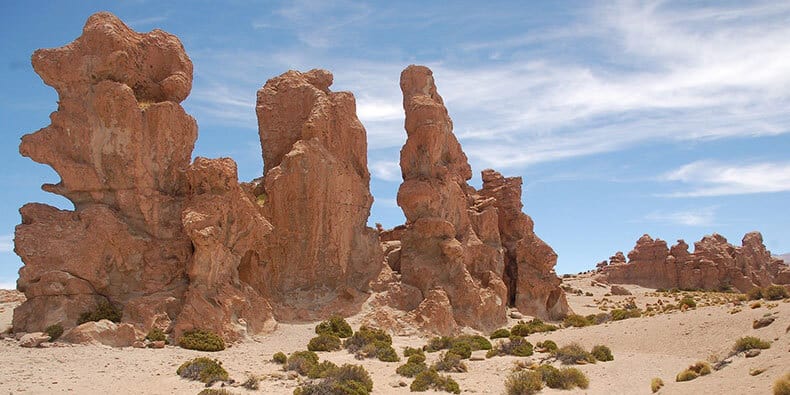 As you may know, there are different rock formations, such as the Arbol de Piedra (Rock Tree), which is the most well-known rock in the area, but this is not the only outstanding hidden work of nature in the National Reserve.

The Rock Valley has become a famous tourist attraction in Uyuni, containing dozens of interesting and strange formations. This astonishing location will allow you to take otherworldly pictures.

It is said that these rock formations resemble natural and manmade objects, the most recognized are the World Cup Trophy and The Camel rocks. 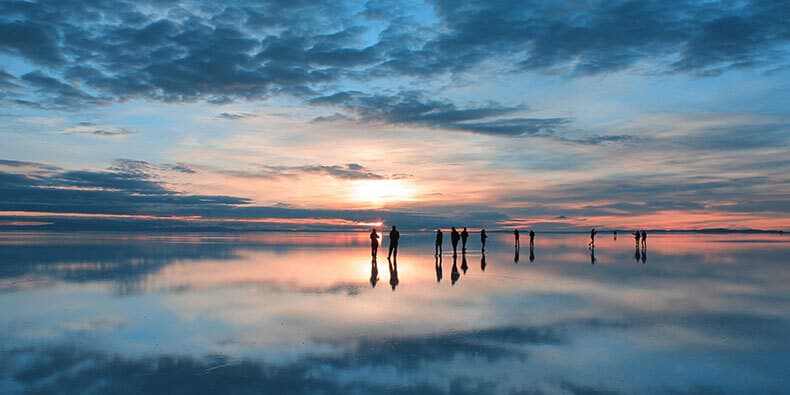 These are some of the famous places in Bolivia that you can find in the Uyuni Salt Flats, this national park has lots of different and hidden gems that will make your trip through South America even more exciting.

Without a doubt, the Uyuni Salt Flats is one of the reasons why to go to Bolivia! Don’t miss the opportunity to know every single detail of this colorful and cultural country, if you want to know more about how to get to Uyuni, check out our guide.

Discover how to get there

Everything to see and do

Sign up to get the latest news and information about Salar de Uyuni.